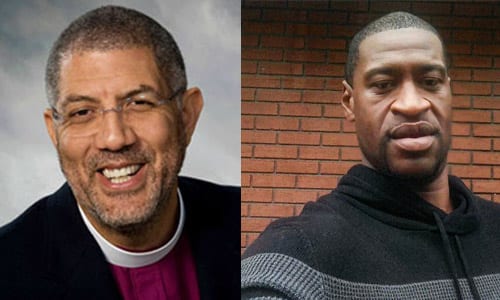 ATLANTA—The Right Rev. Robert C. Wright, 10th Bishop of the Episcopal Diocese of Atlanta, issued the following statement in response to the killing by police of George Floyd:

“From the founding of our country we have had a white supremacy problem.

In three vivid and tragic incidents this week, this founding flaw has been revealed again. What looks like the behavior of a few bad actors is actually a system producing what it was designed to produce, the denial of dignity and safety to black and brown people, specifically black men.

My heart breaks with every telling and retelling of the Ahmaud Aubrey and George Floyd murders. My heart has been broken time and time again in this way since I can remember.

I fear for the lives and mental well-being of my three black sons. Especially because we know that organized white supremacists and their sympathizers have infiltrated law enforcement and government at every level.

I do not condone violence by the police or protesters because I am a prisoner of God’s hope, because Jesus is the Lord of my life. And, I do not condone property damage for the cause of protest because it gives critics a means to diminish legitimate concerns.  But I am, like so many, at my wits end.

When we are killed like dogs in the street, we are told to be patient and that justice will prevail except, justice in these instances, has been the exception and not the rule. People of every race and good will have been told that our eyes are lying when we see murder, or that the person deserved to die because they had a past. So in these two cases we will wait breathing shallow breaths to see if in Georgia and Minnesota we will deviate from our well-worn American pattern.

I stand with all law enforcement who protect and serve the dignity, safety, and rights of all people. I stand with Police Chief Shields here in Atlanta. I echo Mayor Lance-Bottoms words, “we can do better than this in Atlanta.”

And, I pray that the blood of Ahmaud Aubrey and George Floyd has not been spilled in vain.”

previousOP/EDP: Minneapolis death should bring us together, not tear us apart