DEKALB COUNTY, GA—TheStephenson Lady Jaguars got its 2022 high school volleyball season off to a quick start with a sweep of McNair and Towers in action at McNair on Thursday night(Aug. 11).

The first set featured a fast 6-0 start by Stephenson (2-0) behind the serving of Morgan Shepard. McNair picked up three points and was trailing 13-3 when Stephenson went on an 12-0 run to close out the 15-3. Stephenson’s Mya Smoot reeled off 11 straight points serving out the set.

McNair got out to a 6-1 lead in the second set as Jada Howard’s block gave them the five-point lead early.

Stephenson began to close the gap from that point tying the game five times including the final time at 16-16. A kill by Jamaya Allen put Stephenson ahead for good at 17-16.

Kiersten Wright put together a couple of service winners as the lead climbed to 21-16. Stephenson outscored McNair 9-2 over the final stretch to take the set 25-18 to close out the match. 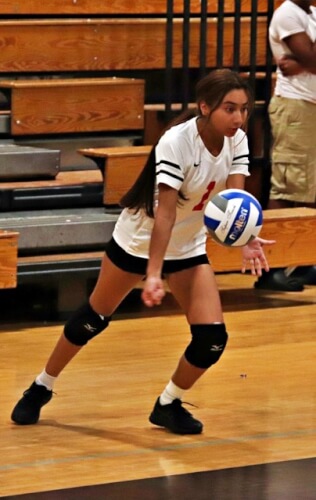 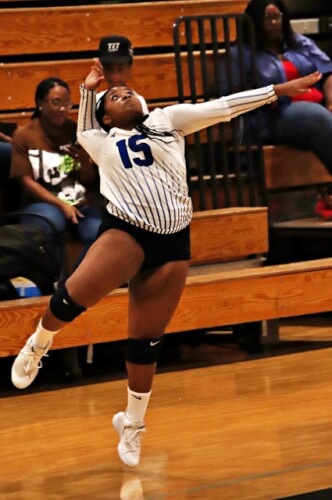 Stephenson completed the sweep with a 2-0 (25-10, 25-20) win against the Towers Lady Titans in the second match of the night at McNair.

An 11-2 run over the final third of the opening set 25-10 win keyed Stephenson’s 1-0 advantage to open the match. Shepard’s serving aided the run as she started with an ace and Jasmine White had a pair of nice plays at the net as the lead expanded to 21-8.

Allen had a service winner to close out the set at 25-10.

Towers battled Stephenson back-and-forth throughout the second set. The Titans won two points on the serve of Iteria Davis to tie the match at 16-16.

Stephenson’s Breona Issac gave the Jaguars the lead for good at 17-16 as she put a nice touch shot into an open spot on Towers’ side of the net.

Saniia Whyte served out the final three points of the match to close out the win.

Towers and McNair battled each other throughout the final match as the Titans (1-1) would pull out a pair set wins for their first win of the season.

Towers’ Shaniya Lee served out the game for the Titans as she would serve to aces and three winners to close out a 25-19 win to take the lead in the match.

The second set featured six lead changes as the two teams jockeyed for the lead throughout the set. Iteria Davis had a sequence of back-to-back blocks at the net to give towers a 10-8 lead at one point.

McNair rallied back to go up 13-10 behind the serving of Ashley Gomez until a player got into the net to stop the string. Another touch of the net tied the game at 14-14 to give Towers the serve.

Nelani Pettiford served as the Titans pulled out to an 18-14 lead and would never trail again in the match. Tatianna Thomas hit a pair of service winners to extend the advantage to 21-15.

Niana Huai would get the ball to serve out the match in the 25-20 victory to give Towers the win.

Story and photos by Mark Brock. Brock is the Athletics Specialist for the DeKalb County School District’s Athletics Department.